The winning teams of the #CedefopPhotoAward 2019 competition come from Austria, Croatia and Romania.

In total, 112 teams of vocational education and training (VET) learners from 20 European countries took part in the fourth edition of the #CedefopPhotoAward. The teams consisted of 380 VET learners and 76 teachers/trainers, representing 73 learning providers. The learners were asked to share a photostory of a memorable VET experience.

Two winning teams, from Austria (‘Cultureconnects’ team from the College of engineering, art and design and Institute for research and technology Graz-Ortweinschule) and Croatia (‘The Chefs’ team from the Economic and Tourism School of Daruvar), have been nominated for the top award to be presented by European Commissioner for Employment, Social Affairs, Skills and Labour Mobility Marianne Thyssen at the fourth European vocational skills week (#EUVocationalSkills) in Helsinki (14-18 October). The top spot will be decided via an online public vote, organised by the European Commission during the European vocational skills week. Details of the vote will be published in due course. 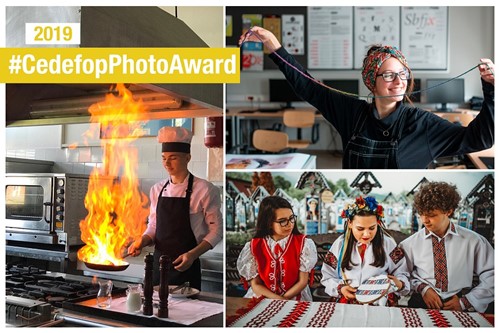 The Prix du jury this year goes to the ‘Artisan in Maramureș’ team from the Marmația Technological High School in Romania. The team will travel to Thessaloniki for the opening of the 60th Thessaloniki International Film Festival (#TIFF60) on 31 October. The 20 winning and runner-up entries will be exhibited in Thessaloniki in the context of #TIFF60 and in Helsinki during the #EUVocationalSkills week.

Anna Fachbach, Sarah Steinhäusler, Jacob Jabornig and Benjamin Wedemeyer bring together the experiences of four individuals from different environments and diverse vocational art schools in Germany, Austria, Poland and Italy. Their photostory depicts the power of VET to connect people no matter where they come from. They shared their Erasmus+ project INTERFACE experience where, during a one-week workshop, they had the opportunity to get to know one another and learn about different educational approaches in arts and design.

Lara Ivesa, Martina Stari and Domink Zulj were inspired by the talent of young chef Matej who has been appreciated by various top-notch hotels and has already had numerous job offers. They show his love of food and especially of making desserts. On the night before the photoshoot he was up until 4am making birthday cakes! Matej is also looking forward to possibilities of further education and improvement.

Romania: My path, our path... (‘Artisan in Maramureș’ team)

Beatris Panas, Carina Czako, Patrick Liszkovics and Alin Pașca portray through their photostory how tradition and art can become a source of inspiration to start one’s own professional venture. The fascination for a grandmother’s embroidering of traditional shirts, the pride in wearing them and the impression they left on an encouraging teacher were the incentive behind the creation of the mini-company DALSI SRL. With the help of associates from different nationalities this mini-company promotes a strong connection between the locals and the traditional products of various cultures: Romanian, Hungarian, and Ukrainian.

In May-June 2021, the Institute for Social Research in Zagreb conducted a survey on the impact of the COVID-19 pandemic on education in Croatia. The survey concludes that the effects of the pandemic on learners’ wellbeing and learning progress were considerable; it calls for effective policy responses.

Skills competitions during the COVID-19 pandemic

While facing the challenges posed by the COVID-19 pandemic, the WorldSkills Croatia 2021 competition was held live from 11 to 13 May in Zagreb, Croatia, for over 300 IVET learners in 43 disciplines.

From March to June 2020, during the Covid-19 lockdown and the school transition to distance learning, the Agency for VET and Adult Education (ASOO) conducted a survey on the experience, attitudes and needs associated with distance learning in Croatia. They asked 1348 IVET and CVET teachers to assess digital competences, distance learning delivery and available support. Further surveys were also conducted among pre-tertiary and provider levels to plan support and different scenarios for education and training delivery in 2020/21.

The Zagreb and Petrinja earthquakes that occurred in the spring and winter of 2020 respectively, caused major disruption in the education process at all levels, including VET.

As of 30 April 2022, around 5 000 persons displaced from Ukraine have been welcomed in Luxembourg. Many measures were taken to promote their integration in education and the labour market.

As official partner event of the 2022 European vocational skills week, the Ministry of Education inaugurated on 16th of May 2022, the Digital Learning Hub (DLH), a modern training centre that offer

At national level, an inter-ministerial crisis unit is coordinating actions taken to host refugees fleeing the war in Ukraine, in cooperation with citizens, associations and local authority solidar